This is a short story about Josh, a sixth-grader and avid baseball fan. Josh enjoys teaching tricks to his cat, Big Z, who is named after Josh's favorite Chicago Cubs pitcher. When Josh's Official Chicago Cubs alarm clock starts going off at odd times, he thinks his younger sister Cammi is playing a few tricks of her own. But before Josh can accomplish his revenge, he is hit with a big surprise.

For classroom creative writing ideas featuring this story and others in the collection, download a Teacher's Guide here .

Here's the description of the anthology that appeared on the Candlewick Press website:

"An arrogant prince tries to bluff his way out of paying the bridge troll’s toll, only to find that honesty really is its own reward. Judy Moody dreams up her best-ever prank on Stink, but he finds a hilarious way to make her joke fall splat. And when a boy’s grandfather plays an elaborate trick that has the whole town laughing at him, can he use it one day to big-time advantage? Edited by acclaimed children’s author Johanna Hurwitz, this collection of stories -- all woven around the phrase "I fooled you" -- range from a comic graphic tale about clever chimps to thought-provoking explorations of fairness, empathy, eccentricity, and the power of imagination.

How many different ways can ten leading middle-grade authors tell a story including the line "I fooled you"? Prepare to be surprised!"

I Fooled You: Ten Stories of Tricks, Jokes, and Switcheroos includes contributions by:

Carmela is thrilled to be in such excellent company! 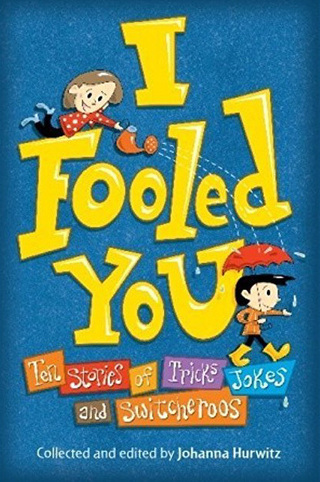