Carmela Martino is an author, speaker, and writing teacher.

She wrote the middle-grade novel, Rosa, Sola (Candlewick Press), while working on her MFA in Writing for Children and Young Adults at Vermont College. The novel was a Booklist "Top Ten First Novel for Youth" and received a Catholic Press Association Book Award. Her second novel, Playing by Heart (Vinspire Publishing), has received numerous awards, including the Catholic Arts and Letters Award, the Independent Author Network Book of the Year Award for Outstanding Young Adult Fiction, and a Moonbeam Children's Book Awards Gold Medal for Young Adult Historical. Carmela's credits for teens and tweens also include short stories and poems in magazines and anthologies. Her articles for adults have appeared in such publications as the Chicago Tribune, Catholic Parent, and multiple editions of the Children's Writer's and Illustrator's Market. Carmela has taught writing workshops for children and adults since 1998, and she blogs about teaching and writing at TeachingAuthors.com.

For a sample of my presentation topics and a list of some of the events where I've presented, see the left sidebar of the Speaking page.

Like the main character in Rosa, Sola, I am the daughter of Italian immigrants, and I was born and raised in Chicago. Unlike Rosa Bernardi, though, I am not an only child. Here's a picture of me with my younger brother and sister. 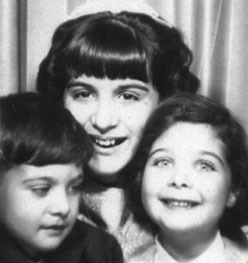 As a child, I loved to read so much that my mother often scolded me, saying, "You spend too much time with your nose in a book." Because my family owned few books, I made regular bus trips to the library to stock up on reading material. When I was ten, my father purchased a brand new twenty-volume World Book Encyclopedia. The encyclopedia became one of my most valued possessions. I still use it to help me remember what the world was like when I was ten years old.

In junior high school, I began keeping a journal and writing poetry. The first piece of writing I ever had published was a poem called "My Sanctuary." It appeared in a book of creative writing by Chicago public school students. I also had an essay published in the local newspaper and one of my poems appeared in my high school yearbook. Here's a picture of me on my high school graduation day, with my brother and sister again. 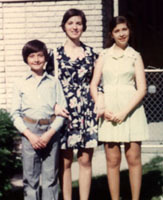 I put aside my writing dreams to major in Mathematics and Computer Science in college. After graduation, I took a position as a computer programmer, married, and moved to a Chicago suburb. I worked with computers for five years before becoming a training course developer. Writing training materials soon rekindled my interest in writing. After my son was born, I quit my training job and became a freelance writer.

I worked as a freelancer for the New Catholic Explorer for five years, writing feature articles and a bi-weekly interview column. Some of my articles and essays also appeared in the Chicago Tribune and several national magazines, including Writer's Digest and Catholic Parent. Eventually, after being inspired by the books I read to my son every day, I decided to become a children's writer. I went back to school and completed an MFA in Writing at Vermont College. That's where I first started writing Rosa, Sola. Even though parts of the novel are based on things that happened to me as a child, it's really Rosa's story, not mine.

Nowadays, I love to teach almost as much as I love to write. I have taught writing classes at the College of DuPage in Glen Ellyn, Illinois since April 1998. I also teach children's writing camps at the Mayslake Peabody Estate in Oak Brook, IL. To learn more about my classes, see the Classes page. I'm also available to speak at libraries, schools, and conferences. See the Speaking page for more information.

Five Things Most People Don't Know About Me: